RF/microwave cable assemblies are critical components in many systems, essential for providing high-frequency signal interconnections with no room for failure.

Coaxial cable assemblies are indispensable, signal-routing components in many RF/microwave systems, although they are often specified and added as an afterthought. For military applications, the durability of high-reliability (hi-rel) cables can mean the difference between life and death. In deep-space missions, such as for communications or surveillance satellites, cable failure is not an option. But military and aerospace applications are no longer the only requirements for hi-rel cables and connectors, and more and more commercial and industrial users come to depend on long operating lifetimes from cables installed in such applications as commercial communications systems and industrial manufacturing equipment.

Choosing a hi-rel RF/microwave cable assembly may be essential to the completion of a system design, whether it is for commercial, industrial, or military applications. But it is not just a simple matter of looking up a few specifications and making a cable fit a set of requirements. It is important to understand how reliability is defined for different applications and then how it can be achieved with different types of RF/microwave cable assemblies for reliability that stands the test of time and whatever an application can throw at it.

Coaxial RF/microwave cables (Fig. 1) have many uses in high-frequency applications, from “set-and-forget” interconnections in commercial or military communications equipment to applications in test systems where cable positions and connections are constantly changing. 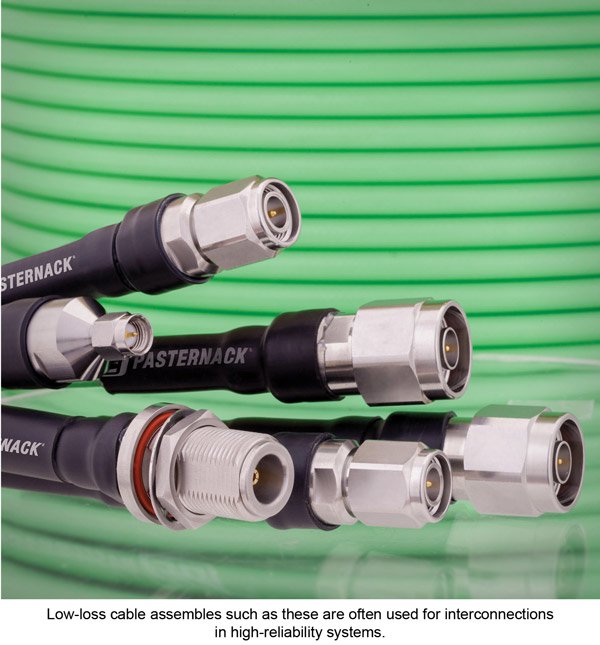 Reliability is often defined in terms of product failures and lifetimes in the shape of a “bath-tub” curve as a function of time, with three different failure rates over a product’s lifetime. The first is a period of decreasing failures, followed by a period of constant failures, with a third period of increasing failures during the wear-out stage of the product. High-reliability cables are designed and assembled for a minimum number of failures along the bath-tub curve and lifetime of the cable assemblies so that subsequent system failures do not result from the failing interconnects.

Reliability refers to receiving the expected levels of performance from a cable assembly every time it is used, without degradation or loss in performance for the full lifetime of the application. Failure of a cable assembly can be expected when it exceeds the mechanical or electrical or environmental limits set for it, such as forming a flexible cable into a bend radius smaller than the recommended minimum or applying RF/microwave power levels higher than the rated maximum or operating the cable assembly at temperatures exceeding the specified operating temperature range. The definition of reliability becomes more complex when limits are set for performance degradation that is acceptable over time, and the performance of a coaxial cable assembly can be described by many different parameters, such as insertion loss, VSWR, and phase stability.

The reliability of a cable assembly may be linked to maintaining tight control on just one or two performance parameters or on a full set of parameters. The required tolerances for what describes a hi-rel cable assembly can differ from one application to another. For example, a variation of ±2 dB in insertion loss over certain temperature and frequency ranges may constitute excellent reliability for a system requiring ±3 dB insertion-loss stability but may result in the failure of a system requiring ±0.5 dB insertion-loss stability. The reliability of a coaxial cable assembly is very much a function of an application and its operating environment.

The reliability of cables and connectors for military and aerospace applications is guided by many different military standards, such as MIL-DTL-17 coaxial cables and MIL-PRF-39012 RF coaxial connectors. MIL-DTL-17 covers many different applications, operating environments, and sets of performance specifications for different coaxial cables, with a great deal of attention paid to the center conductor dimensions and the materials chosen for the center conductor, such as tin, silver-coated copper, and copper-clad steel conductors.

Coaxial connectors for military and aerospace applications must often meet the standards contained within MIL-PRF-39012, which is used by all departments and agencies of the U. S. Department of Defense (DoD). It covers general requirements and test methods for characterizing RF connectors used with flexible and semirigid coaxial cables for military applications, and applies to many different types of connectors, including field-serviceable and non-field-serviceable connectors.

The reliability of these connectors is defined by critical interface materials and finishes, such as PTFE dielectric material, silver-plating thickness on brass-bodied connectors, passivation for steel-bodied connectors, and the thickness of gold plating on the connector center contacts. MIL-PRF-39012 even details the use of recycled, recovered, or environmentally friendly materials in the manufacture of military-grade connectors whenever possible and visual means of checking when connector pairs are properly mated.

Applications for high-rel cable assemblies include interconnections not just in military systems and subsystems, but in commercial, industrial, and a growing number of medical electronic systems relying on electromagnetic (EM) energy for treatment. These are systems where access may be limited, such as on a battlefield or in space, and the cost of failure (whether due to a cable or any other component) is prohibitive.

In many cases, reliability is important for maintaining service, such as in a wireless cellular communications network. The lack of reliability could lead to a costly loss of service in a high-frequency RF/microwave network.  Hi-rel cable assemblies are often used in applications in which performance degradation is unacceptable, such as in test-and-measurement facilities and in automatic-test-equipment (ATE) systems where the accuracy and reliability of the system of the measurements is part of the quality assurance used by a high-frequency component to validate the performance of products before they are shipped.

For such applications as in satellites or other space-based equipment, cable assemblies can be specified according to what are known as “S-level” requirements, characterized by extensive environmental mechanical and electrical testing to ensure the high reliability needed in space-based applications. S-level reliability is considered the highest level of reliability possible for a tested product. It is usually achieved by performing life-testing of a component, such as a coaxial cable assembly, in an environmental chamber in which the component can be operated and tested over the full range of environmental conditions, such as the full temperature range or the full shock and vibration range.

The level of reliability provided by S-level cable assemblies may be unmatched by any other military standard, but it is not without a price for the extensive processes and testing required to produce such failure-free cables. The price tag for such high reliability is considerably higher than for standard grade cables, although when compared to the cost of failure in a space-based application, the investment in S-level reliability is worth it. This leads to the question: What makes one cable assembly more reliable than another? It is due to several factors, including product design, choice of materials, the processes applied, and the level of process control maintained on those processes.

As noted earlier, a cable assembly’s application and operating environment can have a great impact on its reliability and require that an RF cable be designed specifically for an application and operating environment for optimum long-term reliability. For example, a cable assembly lacking proper EMI shielding can provide a pathway to interference in a system with high sensitivity, such as a surveillance or radar receiver.

Recent applications for RF cable assemblies, such as in surveillance unmanned aerial vehicles (UAVs), have demanding requirements for environmental specifications, such as temperature, shock, and vibration, and can fail when equipped with standard-grade cable assemblies rather than hi-rel cables. At the same time, to ease the load requirements on a UAV, cable assemblies for UAV applications should be as compact and light in weight as possible, while still achieving the durability required for hard landings and takeoffs.

The connectors, cable, and cable-connector interfaces must be well designed to maintain high reliability under harsh operating conditions, and the manufacturing processes that assemble those different materials and components into a cable assembly must be well controlled and repeatable. In addition, when specialty materials are used in producing a cable assembly for an application, the manufacturer must have tight control over the supply chain to maintain adequate inventory of the required materials.

While testing is widely referred to as a “non-value-added” part of component manufacturing, testing and measurement results are critical for improving product reliability. A manufacturer will not know how reliable their product is if they are not making measurements on it. Furthermore, manufacturers of high-reliability cable assemblies are frequently working to improve reliability. This entails new ideas, new processes, and experiments. The testing is critical and will ultimately help determine if the new processes are yielding benefits or are inadvertently causing problems. 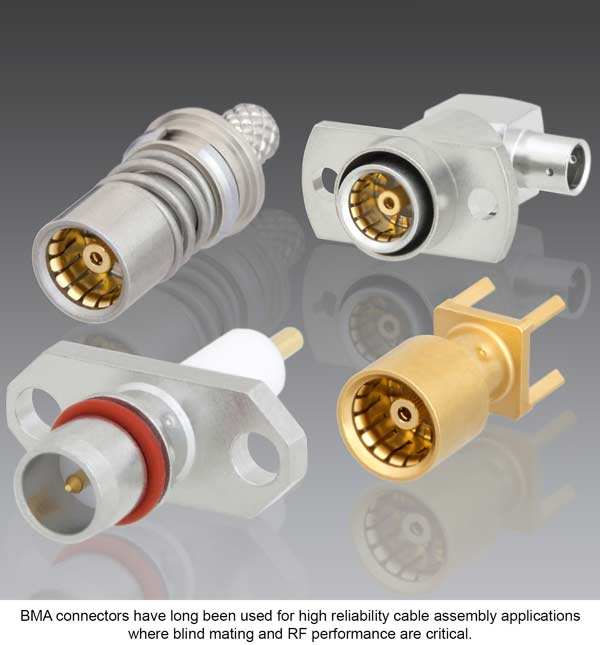 Typical measurements include insertion loss, return loss (VSWR), and phase stability with flexure and over temperature, and thermal cycling, performed on ATE systems built around a microwave vector network analyzer (VNA) with suitable frequency range for the cable assemblies under test. Analysis of the measured data reveals a great deal about the reliability of the cable assemblies, while a review of the historical test data provides insights into the efficiency and effectiveness of the manufacturing process, especially when attempting to create a manufacturing process that provides the highest reliability possible for all combinations of RF/microwave coaxial cables and connectors, such as semirigid and flexible cables and TNC, BNC, Type N, SMA, and BMA connectors (Fig. 2).

Regular measurements and analysis of test results are critical ports of any process for building components with ever-improving reliability, but they are also essential contributors to the product design process, working together with three-dimensional (3D) electromagnetic (EM) simulation software to develop new connector and cable configurations with higher reliability and improving performance at higher frequencies, as commercial, industrial, and military cable and connector specifiers seek ever lower interconnection losses at signal frequencies reaching into the millimeter-wave frequency range. The use of modern computer simulation software tools provides experimental looks at new connector, cable, and interface configurations under any number of operating conditions, as might be needed for high-reliability applications. Access to high-performance test systems and reliable test data helps to validate and refine those connectors and cable models.

Growing dependability on electronic devices at RF, microwave, and even millimeter-wave frequencies for commercial, industrial, and military applications, puts the onus on manufacturers of high-frequency components such as RF/microwave cable assemblies to deliver products with acceptable reliability, and this applies to many different environments and operating conditions. While the breakdown of a wireless base station due to an RF/microwave component failure may lead to lack of cellular communications service for customers in the area around that base station for some time, it can be reached and eventually repaired with a replacement part, even if it happens to be a coaxial cable assembly. The use of a cable assembly with proven track record for reliability in the base station will minimize the need for a repair due to a cable failure. 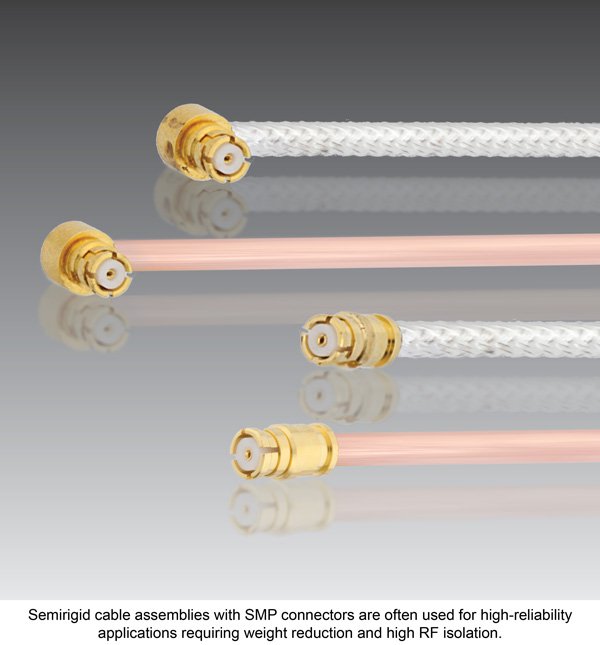 In contrast, should a cable assembly in an orbiting satellite fail, the repair is not quite so routine (or inexpensive). Because of the difficulty and cost of repairing the satellite, it is an application that truly calls for the state of the art in reliability for an RF/microwave coaxial cable assembly—cables designed, manufactured, and tested to S-level qualification. These are cable assemblies for applications where failure is not an option (Fig. 3), and where the added cost of this cable rating and qualification is insignificant compared to the cost of a cable failure.