Amazon isn’t the first company that springs to mind as a pioneer of consumer IoT devices, but the online giant is about to make a major splash in the market. We take a closer look at several new products.

Following its successful launch in the USA, Amazon’s ‘Dash’ ordering system has been rolled out in the UK. Now comes the Echo Dot, a more affordable version of the always-connected digital assistant that utilizes Amazon’s cloud-based artificial intelligence, Alexa.

Order at the push of a button

The Amazon Dash button is a simple Wi-Fi connected device that reorders specific consumable products whenever you press it. To help prevent confusion, a button press will only be acted upon once until an order is delivered.

Each button is tied to a specific product and designed to be placed near that product around the home. For example, the washing powder button can be fixed to the side of the washing machine, or inside a storage unit in your utility room.

Commercially, Amazon has made a masterstroke by tying in the product to their Prime subscription scheme, which aims to keep customers within the Amazon economy. They also essentially give away the device. Although it costs $4.99, that amount is returned to the customer as credit upon first use.

A virtual assistant for the home

Launched this month in the USA, UK and Germany, the Echo Dot is notable not for what it does, but for what it doesn’t have. There’s no screen, and all communication with the device is done verbally using the trigger word ‘Alexa.’ 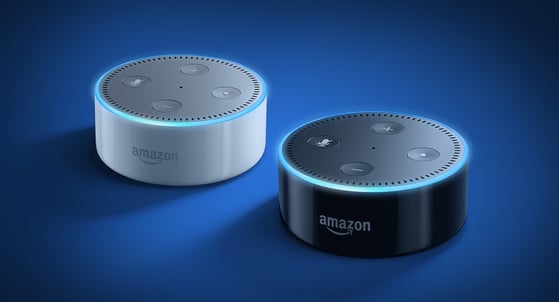 Right now the Echo and Echo Dot can play music, turn on lights and order things from Amazon, but it doesn’t take too much imagination to see future iterations acting a central console for a fully smart aware home.

The cloud-based software is simple to update and in fact Amazon makes updates every two weeks. This ability to refresh the software helps to future-proof the hardware, thus keeping people in the Amazon ecosystem for longer. When the original Echo was launched in 2014 it supported 70 skills, but this has now been increased to 1,700.

Privacy will be a concern for some given the voice-activated interface means the cloud-based Alexa AI is always listening to conversations, but Amazon have made it clear that general conversations will not be stored in their cloud.

Whether Amazon succeeds with its Echo suite of products or not, this form of device seems likely to be the future direction of consumer IoT interfaces. Google is already on their tail with Google Home, and Apple seems likely to follow having finally opened up Siri to external developers this summer.

Remember the days when Amazon was a hip young bookstore? Given their place now as one of the world’s leading provider of cloud services, it’s incredible to think the company was founded as a simple online bookstore as recently as 1994.

> Read also: Internet of Things: Beyond the Hype

Jeff Bezos had the initial vision to take books and shopping online, but then saw the potential hidden in plain sight, in the global infrastructure they had built.

Tools such as the “Mechanical Sensei”, an algorithm which tracks all items and orders within Amazon’s systems, help to automate millions of operational decisions on a daily basis, such as how much of a particular product the company should buy and in which fulfillment center to store it.

With such a vast suite of cloud technology in place and an enormous customer base from which to learn, Amazon’s move into the consumer IoT market should come as a surprise to no one.

What Amazon has achieved with Dash is to tie an important repeatable revenue stream to the simplest of products, bringing users back to Amazon month after month.

The potential for the Echo suite of products is staggering and could go as far as to reinvent Amazon yet again.

Neither the Midrand or Durban offices carry any stock and therefore RF Design cannot support any “over the counter” sales at these locations. Dismiss