By Rich Quinnell – Courtesy of  www.eetimes.com

SEATTLE—While a solid performer in the global navigation satellite system (GNSS) industry, chip maker u-blox is not top of mind when discussing innovation. In fact, they only recently moved up to third-place position in market rankings, according to a recent report from ABI Research. But that perception may change with its recent introduction of two new positioning modules with the potential to dramatically alter the telematics landscape.

First throw of the u-blox one-two punch is the NEO-M8U, which the company bills as the industry’s first untethered 3D dead reckoning module. The module contains a multi-mode satellite navigation system—compatible with GPS, GLOSNASS, BeiDou, and Galileo systems—with onboard 3D gyro and accelerometers. With the additional sensors, the NEO-M8U is able to continue providing position information even when satellite signals are weak or absent.

The integration of 3D dead reckoning with GNSS gives the NEO-M8U a number of advantages over conventional GNSS chips, u-blox product strategy director Stephane Vincent told EE Times in an interview. One is that it is able to provide position instantaneously upon power-up rather than waiting for an initial satellite position fix as with other GNSS devices. Another is superior accuracy in challenging environments such as urban canyons and tunnels—up to three times more accurate than a conventional GNSS receiver—due to advanced multipath suppression technology.

Further, the sensors are sufficient unto themselves to accurately track positional changes without the need for external information such as vehicle tire rotation, steering, or the like. This freedom from connection to any vehicle systems other than power can greatly simplify the incorporation of telematics into vehicles, expanding the market opportunities for the technology. Also important to such expansion are the ease of use that comes with the module’s continuous self-calibration capability, allowing it to be installed in any orientation, and the fact the module operates and behaves like a regular GNSS receiver, requiring no special programming.

While the 3D dead reckoning module promises to greatly expand the application of telematics, the NEO-M8P GNSS module promises a similar expansion in high-precision positioning applications. “High precision GNSS modules provide sub-meter level accuracy,” Vincent said, “but they were too expensive and too power hungry.” With the NEO-M8P, he added, those limitations drop dramatically. 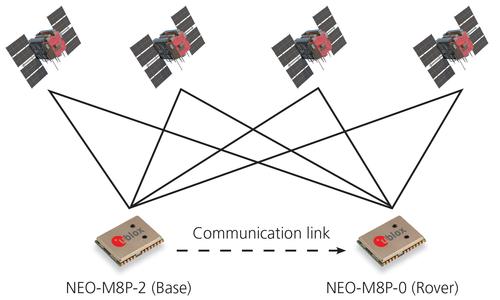 The NEO-M8P modules come in two types. The -2 module is a base receiver while the -0 is a rover module. With the base module located in a stable, well-defined position, it is able to identify employ built-in real-time kinematic (RTK) algorithms to estimate errors in the satellite signals that affect position accuracy and then send correction information to a rover module using an RTCM (radio technical commission for marine services) communications link. The result is centimeter-level position accuracy at the rover module over a baseline as great as 10 km.

The approach significantly reduces the size and weight of the rover unit while reducing power consumption up to five times that of existing systems. Before the NEO-M8P, Vincent said, such high precision required board-level products that were only practical in niche applications such as surveying and construction. Now, emerging mass-market applications such as UAVs (drones), self-guided robots, precision agriculture, and the like have a 12.2 x 16 mm module-level sub-meter positioning system available that requires less than 25 mA at 3V.

Both the NEO-M8U and NEO-M8P were demonstrated at Embedded World last month and are sampling now. Volume shipping is scheduled to begin in Q3 2016.