Technology may be perfect for 5G, but there are still some challenges to overcome.

The RF gallium nitride (GaN) device market is heating up amid the need for more performance with better power densities in a range of systems, such as infrastructure equipment, missile defense and radar.

On one front, for example, RF GaN is beginning to displace a silicon-based technology for the power amplifier sockets in today’s wireless base stations. GaN is making inroads in base stations, mainly because it’s a wide-bandgap technology, meaning that it is faster and provides higher breakdown voltages than silicon and other III-V devices.

Now, seeking to leverage these properties into a bigger market, some RF GaN suppliers are targeting the technology for future handheld systems. RF GaN is overkill and too expensive for today’s smartphones, but it’s a candidate for future handhelds based on a next-generation wireless standard called 5G.

RF GaN is ideal for 5G or even advanced 4G systems, as the technology shines at higher frequency ranges. But for future handhelds, the material has some challenges, such as power consumption, thermal issues and cost.

Still, the industry should keep a close eye on the progress of RF GaN. “GaN devices can handle more power than other high frequency technologies like GaAs and InP, with better frequency performance characteristics than other power technologies like LDMOS and SiC,” said Eric Higham, an analyst with Strategy Analytics.

“GaN devices also have higher instantaneous bandwidths, which becomes important as the industry goes to higher frequencies where the bands are wider and implements more carrier aggregation bands,” Higham said. “This means fewer amplifiers are needed to cover all the bands and channels.”

To be sure, GaN won’t dominate the entire RF world. As before, equipment OEMs will use a range of devices and process technologies in their systems, including III-V and silicon. “There’s a place for GaAs (and other III-V technologies) and a place for silicon,” said Peter Rabbeni, director of RF marketing at GlobalFoundries.

What is GaN?
The development of GaN can be traced back to the 1970s, when RCA devised a GaN process for LEDs. Today, a large percentage of LEDs that are sold in the market are based on GaN and sapphire substrates.

Today, Cree, Infineon, Macom, NXP, Qorvo, Sumitomo and others are selling RF GaN devices. (In July, Infineon entered into a definitive agreement to acquire the Wolfspeed division of Cree. Wolfspeed is a provider of SiC-based power and GaN-on-SiC-based RF power devices.) And several defense contractors, such as BAE, Northrop Grumman and Raytheon, are developing GaN and other III-V technologies.

Based on gallium and nitrogen atoms, GaN is used to develop a GaN field-effect transistor (FET). In a horizontal GaN FET, the current flows from the source to the drain via a gate, much like the operation in a silicon-based MOSFET.

What sets GaN apart is its wide-bandgap properties, which refers to the amount of energy required for an electron to break free from its orbit. It’s also a parameter that determines the mass of freely moving electrons.

The problem with GaN? It’s expensive. Most RF GaN is produced on smaller and expensive SiC substrates.

Besides cost, there are other issues with RF GaN. “GaN device characterization is required to provide designers with predictable transistor models from which they can perform circuit simulations and develop the necessary impedance matching and bias circuitry for high-efficiency/high-linearity power amplifiers used in today’s communication systems,” Vye said. “In addition, designers are applying GaN to new technologies, such as envelope tracking, digital pre-distortion and waveform engineering via harmonic load-pull measurements/simulation. These rely on extremely large data sets. This requires measurement systems that are fast, accurate and adaptable.”

Military apps
Meanwhile, the first big market for RF GaN was the military/aerospace sector. Some 15 years ago, the U.S. Department of Defense funded the development of RF GaN, thereby propelling the ecosystem for the technology.

Today, the military/aerospace sector accounts for 40% of the RF GaN market, according to Strategy Analytics. Within this sector, the biggest markets for RF GaN are radar and electronic warfare systems. 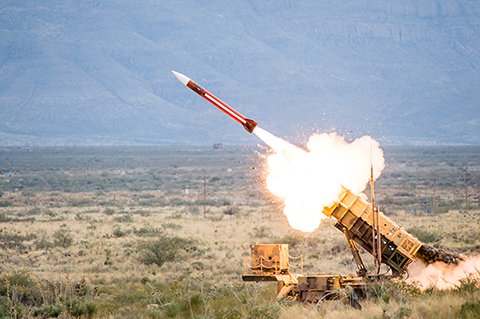 In March, for example, Raytheon announced that it built a new GaN-based antenna system for the Patriot Air and Missile Defense System. The Patriot is a land-based missile defense system that intercepts ballistic missiles, drones and aircraft.

The previous Patriot was based on a radar technology called passive electronic scanning array. The new radar makes use of Active Electronically Scanned Array (AESA) technology. AESA will bring the Patriot closer in terms of providing 360-degree radar capabilities.

“Raytheon believes the GaN-based AESA radar is the next logical upgrade to keep the Patriot ahead of emerging threats,” said Tim Glaeser, vice president of Integrated Air and Missile Defense Business Development at Raytheon.

Basically, AESA radar is based on phased-array technology. A phased-array device consists of an array of antennas with individual radiation elements. These antennas can electrically steer a beam in multiple directions using beamforming techniques.

What’s significant is that this type of technology is migrating from the defense sector into the commercial business. For example, the concepts behind AESA and phased-array are being used for today’s 60 GHz Wi-Fi technology, automotive radar systems and wireless base stations. In addition, phased-array technology will be widely used in 5G.

Meanwhile, in another application, GaN has also made inroads for the power amps in point-to-point handheld tactical radios for the military. From there, some RF GaN suppliers believe that the technology could one day migrate into future smartphones.

Commercial apps
It will take time before RF GaN is used in commercial phones, although the technology is already moving into the base station, and for good reason.

For one thing, carriers are struggling to keep up with the explosion in data traffic in mobile networks. In total, mobile data traffic is expected to rise at an annual rate of 45% from 2015 to 2021, according to Ericsson.

One way to address the data traffic challenges is to deploy a technology called carrier aggregation. This technology combines multiple blocks of spectrum at different frequencies into a single packet. Each block of spectrum is referred to as a component carrier.

In the current LTE cellular standard (Release 10), five component carriers can be combined or aggregated for a maximum bandwidth of 100 MHz.

Carrier aggregation and massive MIMO are fueling the need for a new and more powerful class of power amplifier chips for base stations. Generally, today’s base stations use RF power amps based on LDMOS. But LDMOS hits the wall at frequencies beyond 3.5 GHz and is running out of steam for video bandwidth beyond 300 MHz, according to Qorvo.

For this reason, RF GaN is displacing LDMOS in base stations. “LDMOS has device physics limitations,” said Sumit Tomar, general manager of the Wireless Infrastructure Products Group at Qorvo. “That’s where GaN enters the picture. The need for higher peak power, wider bandwidth and higher frequencies are driving the adoption of GaN inside the base station.”

There are some tradeoffs. RF GaN-on-SiC, according to Qorvo, has higher power densities and better thermal conductivities than GaN-on-silicon.

But silicon is a cheaper substrate material than SiC. Macom, for one, plans to move from 6- to 8-inch GaN-on-silicon wafers, which, in turn, will drive down the costs for RF GaN-on-silicon.

In comparison, the majority of GaN-on-SiC is produced on expensive 3- and 4-inch wafers. Qorvo is transitioning its GaN production to 6-inch wafers by year’s end. “This transition is expected to approximately double Qorvo’s GaN-on-SiC manufacturing capacity,” said Jose Jimenez, a fellow of device physics at Qorvo. “With larger wafer sizes, wireless infrastructure and the commercial GaN market will be able to take advantage of GaN at a lower cost.”

GaN in smartphones?
Still, the big question is whether RF GaN will ever be used for the power amplifier in a smartphone. That won’t happen for today’s 4G phones. But RF GaN could play a role in the RF front-end in future handheld systems.

Today’s cell phones consist of an RF front-end module, which includes the following components—power amplifiers, RF switches and others.

The power amp, which amplifies an input signal, is generally based on GaAs. Meanwhile, an RF switch is a device that routes signals from the power amp to the antenna. Typically, the RF switch is based on RF silicon-on-insulator technology or RF SOI.

“The standards continue to evolve, particularly with the introduction of carrier aggregation. As those types of standards are rolled out, it presents additional challenges on the technology side in order to meet those requirements,” GlobalFoundries’ Rabbeni said. “In general, when you look at the overall architecture (in a handheld system), there are more components that get added between the antenna and the RF SoC. This is impacting things like insertion loss, which is the loss between the antenna and the transceiver, and the linearity between the antenna and transceiver. So, we are continuing to get pushed for better performance, particularly in the case of low noise amplifiers, power amplifiers and switches.”

For example, the latest RF front-ends in today’s smartphones incorporate a multi-mode, multi-band power amplifier. A smartphone may incorporate two (or more) power amps as a means to support multiple frequencies in various countries.

Despite the challenges, smartphone OEMs will continue to use the traditional technology for the power amp—GaAs. “GaAs is cost-effective and provides the performance it needs to,” Strategy Analytics’ Higham said.

But given the challenges in today’s mobile phones, why not use RF GaN for the power amp? “GaN’s intrinsic advantage is in high voltage (up to 10V) applications, where its higher power density nature can potentially shrink the power amplifier die size,” said Domingo Huang, senior manager of sales and marketing at Wavetek, a GaAs-based foundry vendor. Taiwan’s Wavetek is part of the New Business Group at United Microelectronics Corp. (UMC).

“However, current handset designs use a Vcc current range of 3 to 5 volts, where the performance of GaN is very limited,” Huang said. “The high cost of GaN is another barrier for consumer applications, such as handsets. If future smartphones adopt higher Vcc for their front-end modules, GaN may be a good technology candidate, although the prohibitive cost issue will need to be resolved first.”

All told, GaN-based power amps are ideal for high-end applications at 3 GHz and above. For this, the technology could find a home in 5G handsets. 5G, the follow-on to the current wireless standard known as 4G, will enable data transmission rates of more than 10Gbps, or 100 times the throughput of 4G.

Targeted for 2020, 5G will not only co-exist with 4G, but also will operate in the unlicensed or millimeter wave bands. This involves the band of spectrum between 30 GHz and 300 GHz.

“If you look at the 4G handset today, it has gallium-arsenide and SOI,” Qorvo’s Tomar said. “In 5G, GaAs and SOI will still exist. GaN will also be added, particularly at higher frequencies.”

But still, RF GaN must overcome some challenges before it ends up in a 5G phone. According to a recent blog from Qorvo, there are some basic challenges with GaN:

• It will need to operate at lower voltages.
• It requires new package types to overcome the heat and thermal issues.
• The cost is too high.

At the same time, GaAs and other III-V technologies also can be used at higher frequencies, which in turn could potentially relegate GaN into niche-oriented applications.

So going forward, the industry may need to rethink the overall architecture for GaN. “GaN is not the most suitable technology for the cell-phone market PA today,” Qorvo’s Jimenez said. “One could foresee a change of architecture. GaN uses a FET geometry and the PA cell-phone market uses an HBT, which is itself more efficient and linear.”

RF GaN may need to move to a vertical structure. It may also require new channel materials and insulators to enable lower voltages.

Time will tell if that’s enough to get RF GaN into future phones. But to be sure, RF GaN is already altering the landscape.