It has been understood for nearly a century that the conductivity of conductive metals changes as a function of frequency. Though this is the case the phenomenon behind frequency dependent conductivity is not as well understood by man. It was observed early on that the attenuation and resistive losses of metallic transmission lines and traces seemed to be far higher than was expected when compared to the DC conductivity of the base metal or alloy. This was studied and it was further discovered that each metal appears to exhibit reduced conductivity at higher frequencies, but some metals seemed to experience a much greater reduction in conductivity than others.

The depth at which 98% of the electrons or contained referenced from the surface of the conductor is known as the skin depth. The skin depth is a function of the frequency and magnetic permeability and electric permittivity of the metallic conductor, though at frequencies below 1/(resistivity * relative permittivity) the terms including the permittivity are often negligible. The exception to this is with poor solid conductors which seem to approach an asymptotic value for skin depth.

In good conductors, however, the skin depth can be as much as tens of millimeters in the megahertz range and fractions of a millimeter beyond 10 GHz. For instance, the skin depth for copper around 100 GHz is on the order of 0.2 millimeters, though this calculation can vary somewhat as there is a range of listed values for the permeability of some conductors. Iron, on the other hand, with a much higher relative permeability has a much smaller skin depth at comparable frequencies to copper. 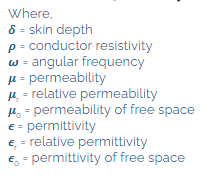