Electronic devices have been ubiquitous in modern life for some time. So it is perhaps easy to assume that everything necessary has already been accomplished in the world of passive components. As consumers, we are all well aware of faster computers, smaller and smarter phones, brighter and flatter TV screens, and an increasingly connected world.

As engineers, we are constantly thinking about changes on the inside. Are there still important component choices to be made? Are the inductor decisions now trivial? Can this be done by “cookbook? If this were true, then power inductor choice should be quite easy, but today’s power electronics engineer knows the situation to be exactly the opposite.

With a large increase in switching frequency, the inductor type for optimal size reduction and performance may require a different structure or shape altogether than was best for a lower frequency. Second, high frequency switching also means that new parameters have to be considered. The main one, of course, is the introduction of ac loss mechanisms that weren’t significant at lower frequency.

Along with changing frequency, new applications drive the need for inductors to be used in new ways, causing a re-prioritization of all inductor parameters like saturation current, ac losses, and dc losses, which must be re-balanced against each other to optimize the solution. New types of use environments, like display screens for home appliances and Ethernet for cars mean the power electronics designer is making new choices. These new applications likely involve converter operation at new operating voltages, new duty cycles, and with new control techniques, placing emphasis on different inductor parameters.

Consider a fairly traditional buck converter operating at 500 kHz to step down 12 Volts to 5 Volts with a 2 Amp load. For example, the 10 µH Coilcraft MSS1260-103 is a nice inductor choice. Operating in these conditions, the inductor ripple current is 30% of the load current, or about 0.7 A pk-pk. At full load, the inductor temperature rise will be about 15° C due to self-heating, mostly as a result of DCR. The inductor body is about 12 x 12 mm with a 6 mm height.

What happens if we double the frequency to 1 MHz and assume the same operation with about 30% ripple current? We can select a Coilcraft MSS7341-501 which, at 5 µH, has half the inductance. The loss and temperature rise are about the same, with a little more of the loss coming from ac loss mechanisms.

The bottom line is that by doubling the frequency from 500 kHz to 1 MHz it was possible to keep the same ripple current and efficiency while reducing inductor size from a footprint of 12 x 12 mm (144 mm2) down to 7.3 x 7.3 mm (53 mm2). That’s a PCB area reduction of more than 60% and a total inductor volume reduction of more than 70% (see Figure 1). This example illustrates a fairly straightforward case in which increasing switching frequency had a substantial size reduction benefit, without sacrificing efficiency. 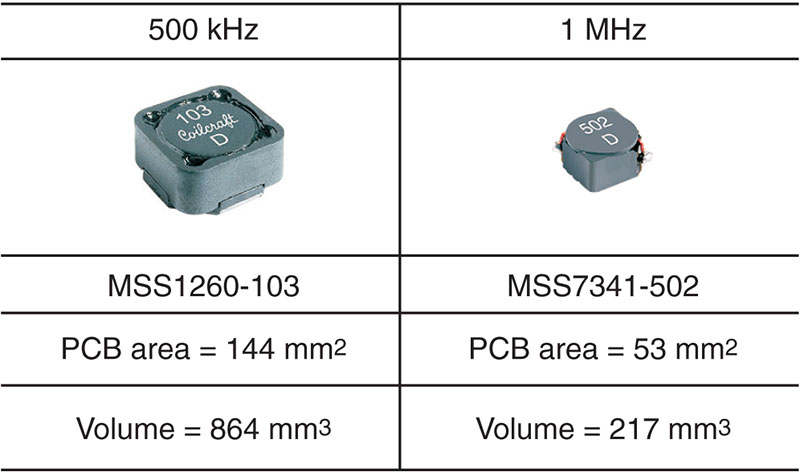 The previous example shows how to reduce inductor size when using fairly traditional ferrite core with air gap inductors. A major trend over the past few years has been the increased popularity of so-called soft saturation inductors which utilize powder cores. The distributed air gap of these core materials gives the highly-desirable benefit of making inductors insensitive to incremental current increases.

An inductor of this type designed into a 3 A application, for example, won’t have significant inductance drop if the current should spike or occasionally rise to, say, 6 or 7 A. This gives the designer the opportunity to design with the smallest inductor size while knowing that for a temporary period or for an unexpected spike in current, the inductance value will stay in a fairly narrow range, allowing continued stable control loop operation. Figure 2 shows the difference between inductors with a traditional ferrite core and a soft saturation type core. In this case both inductors are clearly suitable up to 3 A peak current, but the advantage of the soft saturation inductor is dramatic at higher currents. 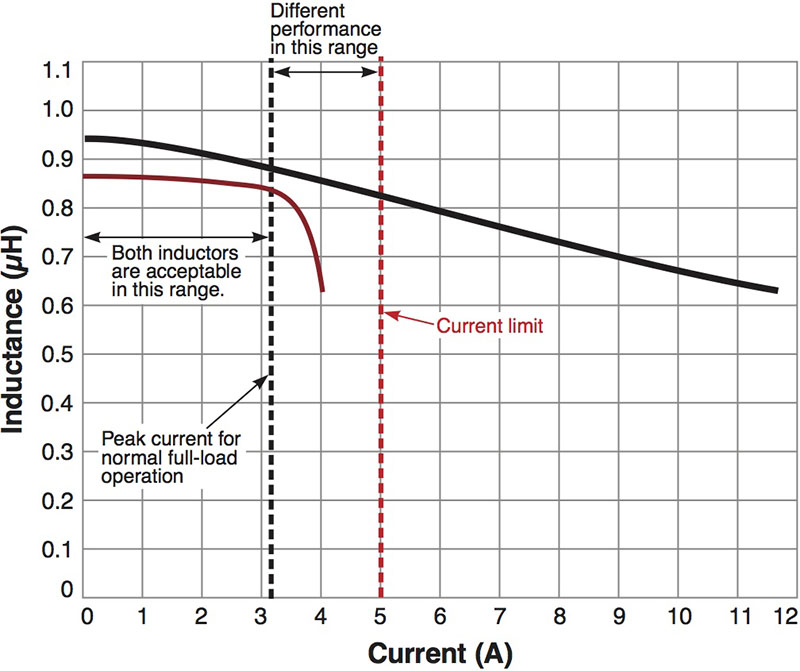 Soft saturation style power inductors clearly have the favorable property of the inductance being insensitive to current peaks, and have been enthusiastically adopted by the industry for miniature devices, including wearables, in which minimum component size is crucial.  With such an outstanding performance, it requires a closer look to understand some of the limits and other tradeoffs between inductor types.

One of the best and easiest ways to consider the bigger picture of all inductor parameters is with a device like Coilcraft’s Power Inductor Analysis & Comparison tool. It simplifies side-by-side comparisons of up to six inductors under the same operating conditions; not just their datasheet specifications but also L vs I graphs, loss calculations, and other frequency- and temperature-dependent changes.

Consider two 1 µH inductors that might be used in a typical 1 MHz converter, with 1 A load current and 0.4 A pk-pk ripple as might be found in a small continuous or critical conduction mode converter. For wearable applications, we select components that are 1mm height or less.  We are able to select a soft saturation inductor in 2 mm x 2 mm footprint to perform with comparable efficiency to a traditional inductor style of 3 mm x 3 mm with about a 50% PCB area reduction (see Table 1).

But under another set of conditions, the choice could be different.  What happens if the frequency were increased to 4 MHz?  At the same time let’s also reduce the load current by half to 0.5 A, and double the ripple current to 0.8 A pk-pk, such as in low duty cycle or discontinuous conduction mode.

In this case the performance is still comparable between the traditional inductor and the smaller size soft saturation choice. It is notable that the inductor losses are predominantly ac losses now, whereas in the previous example DCR loss was dominant. Nevertheless, the designer has a choice between the soft saturation inductor and the larger, slightly more efficient traditional one.

This is very typical of the choices faced by designers every day, with the “right” inductor selection depending very much on the specifics of the application. In this case it is likely the soft saturation style would be the inductor of choice, offering substantially smaller footprint for only a 10% penalty in efficiency (see Table 2).

Table 2:   Traditional vs Soft Saturation at 4 MHz with High Ripple

From these examples, we can see that the balance of inductor losses between ac and dc loss mechanisms changes significantly with application conditions. It is easy to predict that there will be some combination of frequency, ripple current, and load current at which different style inductors will be preferred.

This also demonstrates that a complete set of detailed inductor performance information must be available from the manufacturer. The traditional parameters of inductance, DCR, and saturation current are not adequate to sufficiently compare inductors over a range of possible application conditions. The good news for the designer is that there are many inductor sizes, styles, and materials to address the wide range of applications.

For the continuing trend to higher frequency, the power converter designer can utilize better information now available from inductor suppliers in the form of enhanced datasheets as well as online tools. In addition, the designer can expect inductor manufacturers to improve inductor performance to meet this trend. For example, Coilcraft is has introduced an enhanced soft saturation family of inductors specifically optimized for high frequency. The XEL inductor families maintain the low DCR and high saturation capacity that is expected, with the addition of lower losses at high frequency. Figure 3 shows the reduction in overall inductor losses that can be achieved with this new generation of inductors. 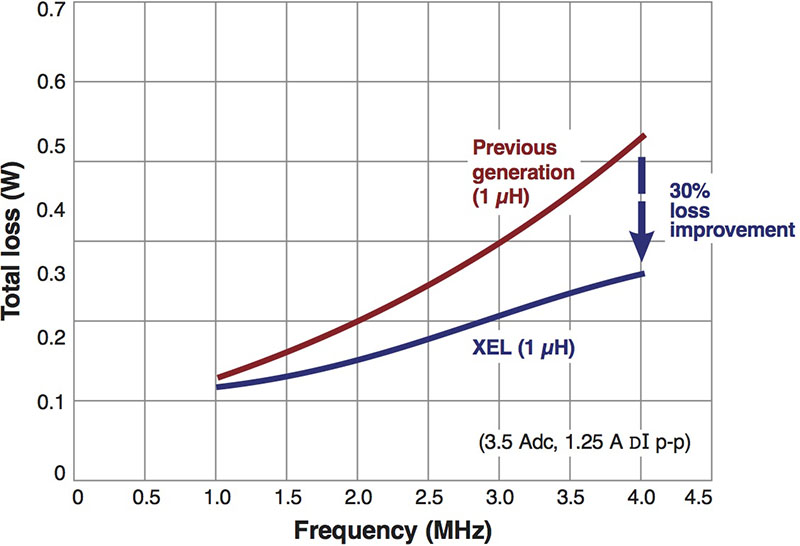 Beyond today’s improved inductors, the converter designer may soon be able to consider completely new inductor styles in order to take advantage of big frequency leaps in future switching converters that are expected to be enabled by new devices and topologies. For frequencies over 10 MHz or 20 MHz, inductors without cores may be considered…. or versions with just enough magnetic material to provide shielding.

This brings into play the type of inductors previously considered for RF applications. Just as the Internet of Things opens up the possibility to connect everything, thinking outside the present inductor “box” will create the exciting possibility of a power solution for everything.