By Cees Links – Courtesy of www.highfrequencyelectronics.com

Professionals in the tech industry – from engineers to management to sales – are excitedly focusing on the smart home as a potential market sector with nearly limitless opportunity for growth. However, it is not quite that simple.

There are many questions and challenges for those companies and organizations who want to get into this space. For example – what exactly is a smart home? What is the difference between a smart home device and a connected device? What is smart? What exactly do end users and customers want – are they looking for DIY devices or do they prefer a ready to go service? And, what about the various tech issues regarding standards and protocols? Which connectivity standard should they use to connect the smart devices to each other and in the cloud?

Devices and systems for the automated home have been around for decades. Remember X10? Other existing pre-smart home automation applications can include thermostats, security systems, any appliance, lighting – essentially anything that can be either set to turn on and off automatically, or can be remotely controlled. In the last five years or so, as part of the “smart home” movement, many manufacturers have been adding an internet connection to these devices. However, these are just connected devices. Adding internet connectivity and app management is essentially just creating long range remote controls.

Adding intelligence is what makes a device or system smart. This means enabling the device to learn from its environment and/or take some kind of action without having to rely on a human being in the middle.

Another smart system can be found in the home security sector. Imagine everyone in the home leaves to go to school or work but the backdoor is left unlocked. A connected security system may note the open door and send an alarm to the homeowner saying that they might want to come home or have someone come by to lock the backdoor. With a “smart” system, the house notices that the door is left unlocked and, in addition to sending an alert, transmits a message to the door and locks it. A smart home system is composed of sentrollers (sensors, controllers and actuators) that capture data in the home, know how to interpret the information, and take the appropriate action.

Consider a smart door system. By using cameras that can capture and send an image to the cloud for facial analysis, not only can the door security system make a note of who visited the house, it also can automatically unlock and admit people that it recognizes as approved visitors or residents. No more fussing with keys, security dongles or hoping that the door recognizes your ID from your smartphone as you walk up carrying an armload of packages. You stroll up to the door and the camera system takes a picture, analyzes it against its database, and then unlocks and opens the door. Smart.

Another type of smart system is a lifestyle-monitoring system. For example, the recently announced Assisted Living Application from Sensara consists of a network of four or more battery-powered ZigBee sensors that track behavior patterns, motion and position.

Many senior citizens prefer to live independently as they get older, “aging in place.” However, their family and caregivers often worry about them, and sometimes they have concerns themselves. The senior lifestyle system – without requiring intrusive cameras or easily forgotten emergency pendants or bracelets – is able to learn how the senior citizen lives. Over a short period of time, it learns when they get up, when they go to the bathroom, when they make meals, when they leave the house – and if they do, for how long.

If there is a sudden change in the schedule, the system then sends out an alert, informing their family or caregiver that they should check up on the senior. Even smarter, the system can recognize incremental small changes to the senior’s lifestyle and can send a message that the person may need a check-up. If they start getting up later and later, if they change their bathroom routine, if they are not eating – the system is smart enough to recognize that there may be a problem.

The true smart home system architecture is a system that relies on “small data” to make decisions and to take actions. Unlike big data networks like financial transactions and entertainment, small data is just a few bits and bytes transmitted a few times an hour. A motion sensor only needs to transmit when there is a motion. A leak detector only needs to transit when there is a leak. To turn on and off the water meter only requires a few bits of information.

The small data architecture that powers the smart home consists of several components – sentrollers, internet gateways or hubs which consolidate the information and transmit it to the cloud, data analytics that can interpret the data, and smartphone apps used to manage and monitor the entire system. Figure 1, the Small Data System Architecture, shows all these components and how they interact.

The Smart Home – Small Data Architecture is very flexible and expandable. In addition to the information gathered by the sensors and transmitted to the system’s various appliances, it can also be used to input data from other system like fitness wearables and health monitors. In addition to the small data, the hubs and gateways can serve a dual purpose, providing high speed internet access and entertainment to the home’s computing devices, TV sets, gaming and other screens. 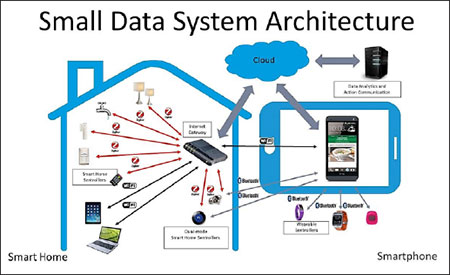 In Fig. 1, ZigBee transmits data over the low rate “small data” sentroller network to the home’s central hub or gateway. Wi-Fi is used for high data rate, high bandwidth applications like computing, web search, music, phone, gaming and entertainment. Bluetooth is used both locally and to the hub from various non-networked applications like health and fitness monitoring.

So what do consumers really want? What is Smart Home as a Service (SHaaS)?

Over the last couple years, there have been numerous studies and analyst reports that indicate that consumers really do want smart homes – they want applications like home security, systems that control lighting, systems that control air conditioning and heating. However, aside from hobbyists and DIYers, most people want the systems to just work. They don’t want to have to research and compare technologies; they don’t want to go out and buy the various devices and then try to hook them all up so they talk together. Consumers really don’t want to be bothered with how to program and calibrate the system. They want the benefits without the challenges.

This is where Smart Home as a Service comes in. SHaaS essentially means that various services providers come in and take care of all the technology and operational challenges. This is of special interest to service providers who already have a foothold in the home – where the consumers are already accustomed to paying a monthly fee for services. In addition to cable TV providers and internet service providers, utilities, telephone companies, security companies, insurance companies and large retailers are also interested in entering this space.

Another issue impacting the development of smart homes is the connectivity issue. How will the various devices talk to each other and to the home gateway or hub? For some appliances like refrigerators, furnaces, air conditioners, etc., it may be appropriate to use a wired connection running over AC power lines. However, for ease of use and installation for most smart devices, it may make more sense to use wireless. However, which wireless tech should be used?

In some cases, the answer is simple. Wi-Fi or a Wi-Fi variant. Wi-Fi is a proven technology for connecting devices with high data throughput like streaming video and entertainment, gaming, voice, etc. The problem is that Wi-Fi consumes a lot of power. As we have all experienced, running Wi-Fi on our smartphone or laptop can drain the battery within a day.

For other “smart” home applications it makes more sense to use a low power, low data rate wireless solution like Bluetooth or ZigBee that can run on batteries. Bluetooth is ideal for short range applications like home health and cable replacement, while ZigBee is more appropriate for wide scale, low data transmission throughout a house. Sounds simple? Well it was, until a few years ago, when many of the top tech firms decided they wanted to be THE smart home technology company.

These large, international companies like Apple, Alphabet (Google), Intel, Qualcomm, Samsung, etc., began developing their own proprietary wireless connectivity “standards.” Unfortunately, these evolving standards do not work with and talk to each other. This means that if a company decides to adopt Apple’s HomeKit solution, then its products won’t talk to hubs and devices that use any of the competitions’ wireless smart home technologies. So what is a potential smart home device maker to do?

Well, they can roll the dice and bet on a technology and hope that in the future, that their chosen tech wins out. Or they can pack their devices with an assortment of radios that will talk to all of the possible technologies (like the short-lived Revolv hubs). Another option is to provide a choice of various connection options (different SKUs) for their products (which is expensive and an inventory nightmare).

The ironic aspect of this battle and confusion is that these various different wireless protocols and emerging standards all do about the same thing, and in the same way. There is not a big performance difference between them.

So what should engineers do when developing devices and solutions for the smart home product?

First, they need to remember the difference between connected devices and smart devices. Next-generation smart devices not only use cloud intelligence to analyze “small data” and make decisions, but they also are able to actually do something, to have an effect on the various actuators and appliances in the home.

Developers need to look at the big picture – at what consumers actually want. Aside from DIYers and early adopters, most consumers do not want to be responsible for the device selection, integration and maintenance. This is a task better left to the service providers who have the bandwidth for this as well as the ability to select whichever connectivity tech they prefer. As they handle all the components, from the gateways and hubs, to the various sensors and the actuators and remote controls, the service providers can avoid the lack of industry interoperability and roll out a total, complete solution based on the tech of their choice.

From security, to entertainment, to home environment control and disaster protection, there are numerous market sectors and opportunities for device makers to leverage and successfully exploit for success.

Cees Links was the founder and CEO of GreenPeak Technologies, now part of Qorvo. Under his responsibility, the first wireless LANs were developed, ultimately becoming household technology integrated into PCs and notebooks. He also pioneered the development of access points, home networking routers, and hotspot base-stations. He was involved in the establishment of the IEEE 802.11 standardization committee and the Wi-Fi Alliance. He was also instrumental in establishing the IEEE 802.15 standardization committee to become the basis for the ZigBee sense and control networking. Since GreenPeak was acquired by Qorvo, Cees has become the General Manager of the Low Power Wireless Business Unit in Qorvo. For more information, please visit greenpeak.com.

Qorvo makes a better world possible by providing innovative RF solutions at the center of connectivity. Visit qorvo.com to learn how Qorvo connects the world.